Vancouver, BC – January 17, 2023 – Etruscus Resources Corp. (CSE: ETR) (OTC: ETRUF) (FSE:ERR) (the “Company” or “Etruscus”) is pleased to announce results from its recently completed 2022 field exploration program (the “Program”) at the Company’s Lewis Property (or “Property”) located in central Newfoundland. Results from the 30 line- km induced-polarization survey (the “IP Survey”) have now been combined with previous soil and rock sampling results to highlight four high priority drill ready targets. The Property is road accessible and is located 5 km south of the Trans Canada Highway in the Gander Gold Belt, approximately 10 km west of the Keats Zone discovery, currently being drilled by New Found Gold Corp.

Stephen Wetherup, Etruscus’ VP of Exploration commented, “The 2022 exploration season has been a huge success. Etruscus has completed a comprehensive geophysical survey that has identified approximately 4.6 km of highly chargeable structures that when combined with soil and rock sampling, confirm multiple gold mineralized trends.  This data outlines large untested drill targets in an area which has produced numerous outcrop samples and glacial float boulders of greater than 20 g/t gold.” He went on to add, “The team is now in the process of designing a comprehensive drill program to test four high priority drill ready targets which we intend to execute in early 2023.”

A total of 30 line-km of IP was completed to expand upon an historical IP survey and focused on areas with favourable magnetic trends and anomalous results from soil sampling done in 2021. This new IP Survey has outlined three new strongly chargeable structures as well as extended those structures previously identified. The new 3D inversion model, when combined with the historic survey, has allowed the team to identify the orientation of these structures that was not possible when the historic work was completed. This new insight will be critical in designing the drill program and increases the likelihood of making a new discovery. 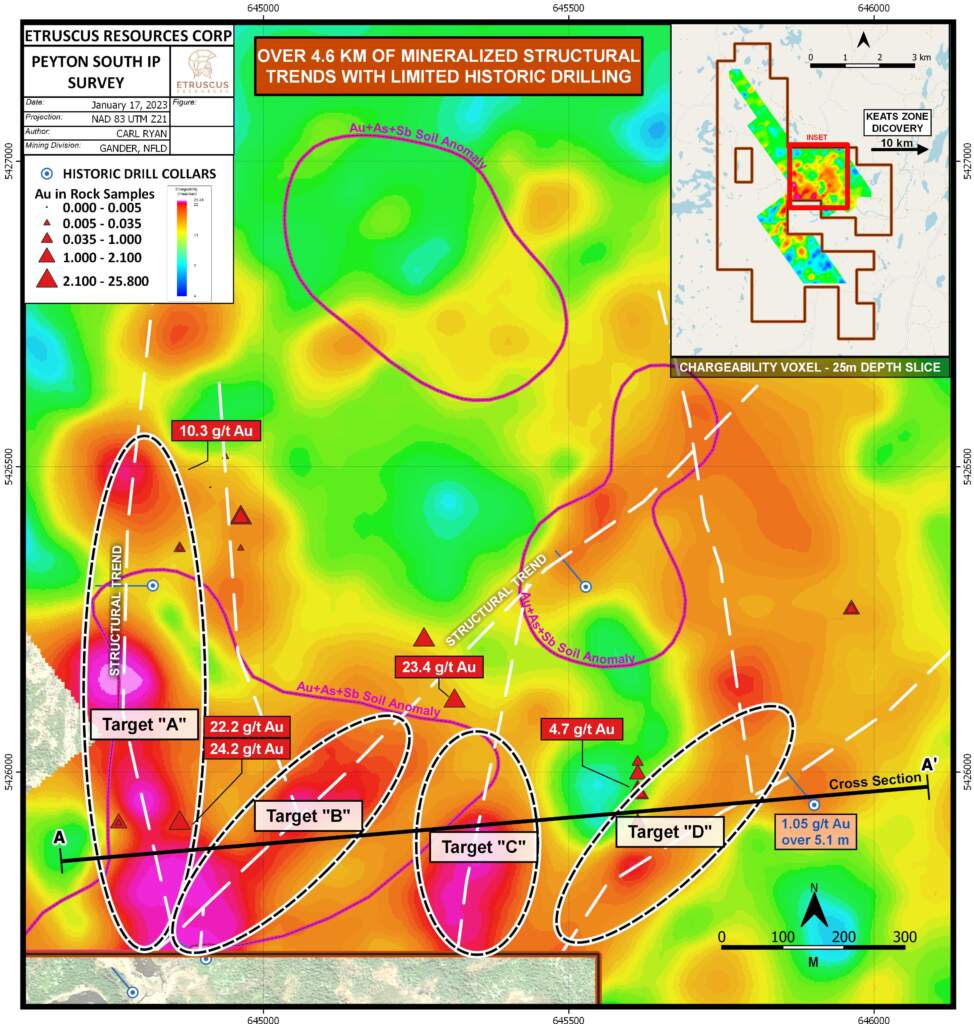 The IP Survey was completed over a large portion of the Property that is underlain by the Mount Peyton Batholith. These intrusive rocks contain low sulphide contents and therefore produce low chargeability responses. The results of the IP Survey confirmed low chargeability in most areas of the Property but demonstrated very high chargeability in the target areas. This high contrast suggests disseminated sulphide minerals have been concentrated in specific structures and is a strong indicator of gold mineralization in the area.

Four short historical drill holes tested the high chargeability structural trends which total ~4.6 km of combined strike length, all of which intersected several gold mineralized veins and alteration zones. Highlights from these drill holes returned a high of 7.6 g/t Au over 0.2 m and numerous veins or alteration zones returned grades of 0.25 to 2.0 g/t Au over 0.2 to 5.1 m in width. Most of these historic holes failed to intercept the highest chargeability zones and the strongest geochemical, geological, and geophysical anomalies remain untested. In addition, the historic drill holes never encountered gold grades similar to those collected at surface which returned multiple assays between 10 to 25 g/t Au, suggesting that the higher grade, sulphide rich mineralization was likely missed in those historic holes.

The Company, having completed significant surface exploration over the last two summers, has confirmed multiple overlapping geochemical and geophysical anomalies and plans to drill these targets in early 2023.

Etruscus Resources Corp. is a Vancouver-based exploration company focused on the acquisition and development of precious metal mineral properties.  The Company’s assets include the Lewis Property in central Newfoundland, which is under option to acquire a 100% interest, and the 100%-owned Rock & Roll and Sugar properties comprising 27,880 hectares near the past producing Snip mine in Northwest B.C.’s prolific Golden Triangle. Etruscus thus has properties in two of Canada’s most active gold camps.

Etruscus is traded under the symbol “ETR” on the Canadian Securities Exchange, “ETRUF” on the OTC and “ERR” on the Frankfurt Stock Exchange.  Etruscus has 38,011,622 common shares issued and outstanding.

Neither the CSE Exchange nor its Regulation Services Provider (as that term is defined in the policies of the CSE) accepts responsibility for the adequacy or accuracy of this release.