Acquisition:Etruscus staked the core of the Sugar Property in early 2019 as part of a strategic land staking program which included the expansion of the Rock & Roll Property towards the northwest. In 2020 Etruscus added “The Hammer” claim based on historic work and 2019 exploration in the area.

Overview:The Sugar Property is located within BC’s Golden Triangle, 25 km southwest of the Galore Creek deposit and 7 km northwest of the Rock and Roll Property. Past mapping on the property has outlined multiple Texas Creek intrusive units that are commonly associated with important copper and/or gold deposits within the Golden Triangle including Galore Creek, KSM copper-gold deposit and Pretium’s Brucejack (Valley of the Kings) gold deposit. A large scale copper anomaly across the property has been the focus of attention. A number of styles of mineralization have been identified including skarn and vein hosted mineralization. The acquisition of the hammer claim also increased potential with high grade copper previously identified in an area that has likely seen glacial retreat.

Etruscus’ wholly owned Sugar Property covers 5,180 hectares to the east of the Stikine River Valley of northwestern British Columbia-165 km north of the ocean port at Stewart. The property is situated within the Golden Triangle which has produced enormous precious and base metal wealth over the past century. This area also contains billions of dollars of undiscovered gold, silver, and copper that sit within unexplored areas.

Once seen as remote, British Columbia’s Golden Triangle has opened up dramatically, with two mines now in production, three new hydro-power facilities, a link to the provincial power grid, and roads throughout the region. Now these world-class deposits can be finally tapped because of infrastructure developments including:

Completion of a $700 million high-voltage transmission line to the Golden Triangle. The Northwest Transmission Line goes 335km from Terrace to Bob Quinn Lake, and north to the Red Chris mine. The power line to the region was a game-changer in terms of project economics, bringing in electricity that is near the lowest cost in the world.

The Sugar Property itself covers 11 contiguous MTO claims located on the east side of the Stikine River Valley.

Access to the property is made via helicopter from the Forest Kerr hydroelectric facility 35 km away. However, Seabridge Gold Corp has proposed a road extension from the existing Forest Kerr road to the Bronson Camp which would improve access to the Sugar Property dramatically. Also, continued work on a road into the Galore Creek Project will ultimately bring road access to with 10 kms of the Sugar Property. 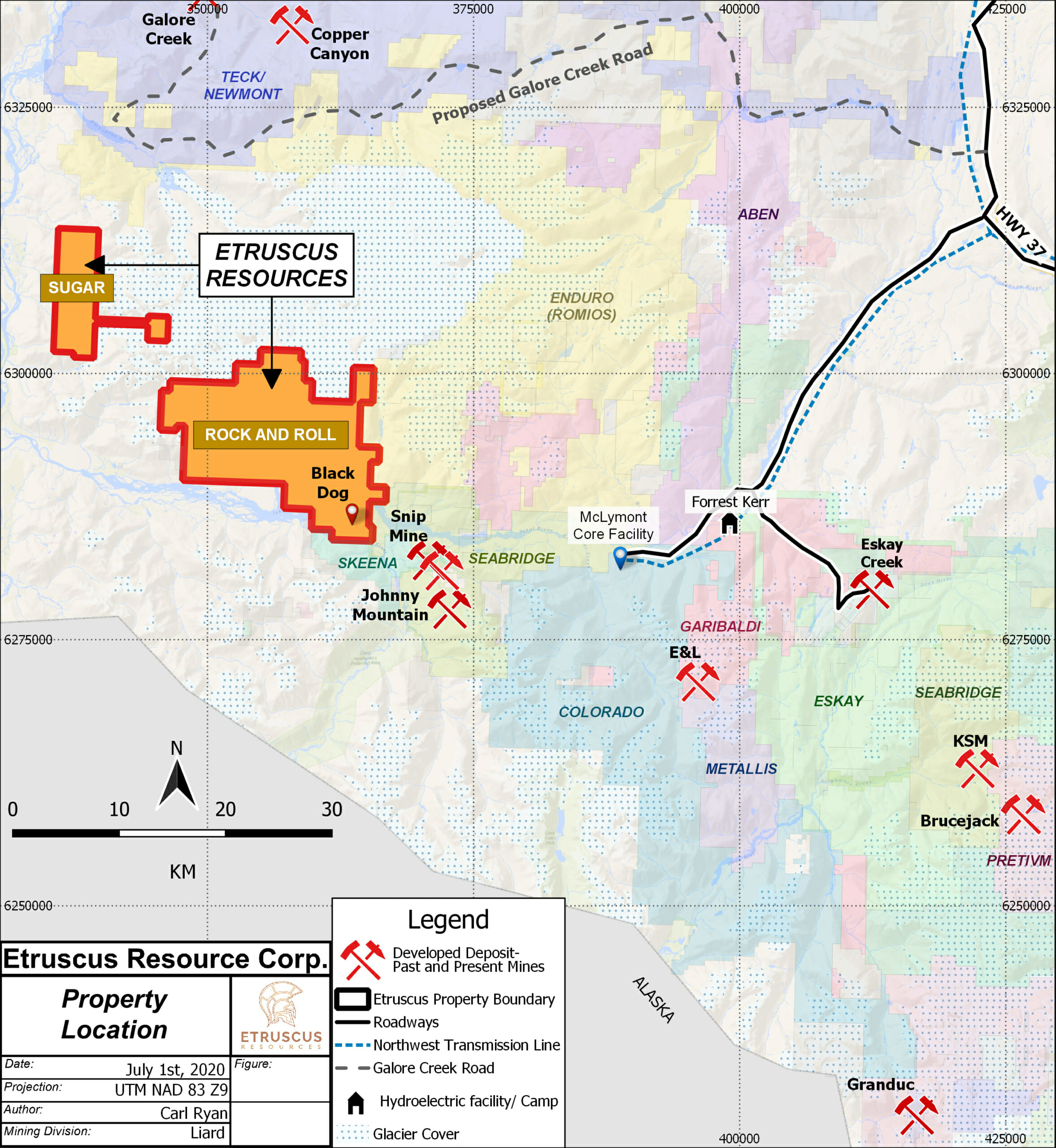 Historical Work: Exploration activity within this region has been limited due to its remote location. During the 1950’s regional copper exploration became prominent with the discovery of Galore Creek. During the 1980’s another increase of regional exploration took place after the discovery of the Snip mine as well as Johnny Mountain. The first recorded exploration activity on the Sugar Property was undertaken by the British Columbia Ministry of Energy, Mines and Resources in completing a large scale stream sediment sampling program throughout the region. This led to the staking of the original Sugar claims in 1987 by Lacana Exploration Inc a subsidiary of Corona Corporation. The two years that followed saw mapping and sampling occur from fly camps located across the property. A total of 524 rock samples were collected by Lacana focusing on multiple showings that included magnetite zinc skarn showings as well as porphyry style quartz veining hosting chalcopyrite and pyrite (Jones, 1989).

In 2014 Coast Mountain Geological Ltd did a one-day reconnaissance on behalf of Hydro Capital Corp. A total of 15 rock samples were taken focusing on the high–grade copper and zinc showings in the north central portion of the property.

The large land package remains under-explored with no drilling ever done on the Sugar claims. Historic rock samples have returned numerous results greater than 1% copper and 5% zinc spread over a large portion of the property.

The Golden Triangle region of Northwestern British Columbia is one of the most richly mineralized areas in the world. The tally of total gold ounces in the Golden Triangle only represents half of the contained metal value since the region also hosts an equivalent value in silver, copper, lead, zinc and other metals. Although the Golden Triangle is dominated by large porphyry copper-gold deposits, the region also hosts a variety of other deposit types. For example, Eskay Creek, a volcanogenic massive sulphide (VMS) deposit, produced 3 million ounces of gold and 160 million ounces of silver from ore with a spectacular grade of 49 g/t gold and 2,406 g/t silver. That deposit was so rich that Barrick transported the untreated ore to a smelter in the United States.

The Sugar Property sits on the edge of the Intermontane belt where it adjoins the coast mountain plutonic complex to the West. Metasedimentary rocks of the Stikine assemblage are overlain by felsic and intermediate volcanics as well as sediments of the Stuhini formation. Late Jurassic Texas Creek intrusions have been mapped across the property intruding into the Stuhini and Stikine assembalges. These intrusions have the significance of hosting many of the major porphyry deposits within the Golden Triangle. Eocene granitoid intrusions relating to the coast plutonic complex also intrude the stratigraphy.

Mineralization across the Sugar claims has been broken into multiple showings with potential for multiple mineralizing systems. Examples of Skarn (chalcopyrite, magnetite, zinc) have been shown to outcrop along a 4 km trend. Other examples of stockwork and quartz veining are host to disseminated and blebby chalcopyrite and pyrite. The scale of mineralization along multiple km’s speaks to the potential for a nearby porphyry intrusion.

During the 2020 Exploration program, a large portion of the property was covered for geological mapping as well as follow up on historic showings. New mineralization was also identified as massive sulphide at two new skarn showings and as blebby chalcopyrite in vein hosted systems.

Mapping and Sampling was also concentrated on the Hammer showing to understand the mineralizing system and to better map the geology. Sampling at this location had several samples with greater then 10% chalcopyrite. The Hammer Target represents a well developed, technically sounds drill target with backing from both geophysics and geochemistry. 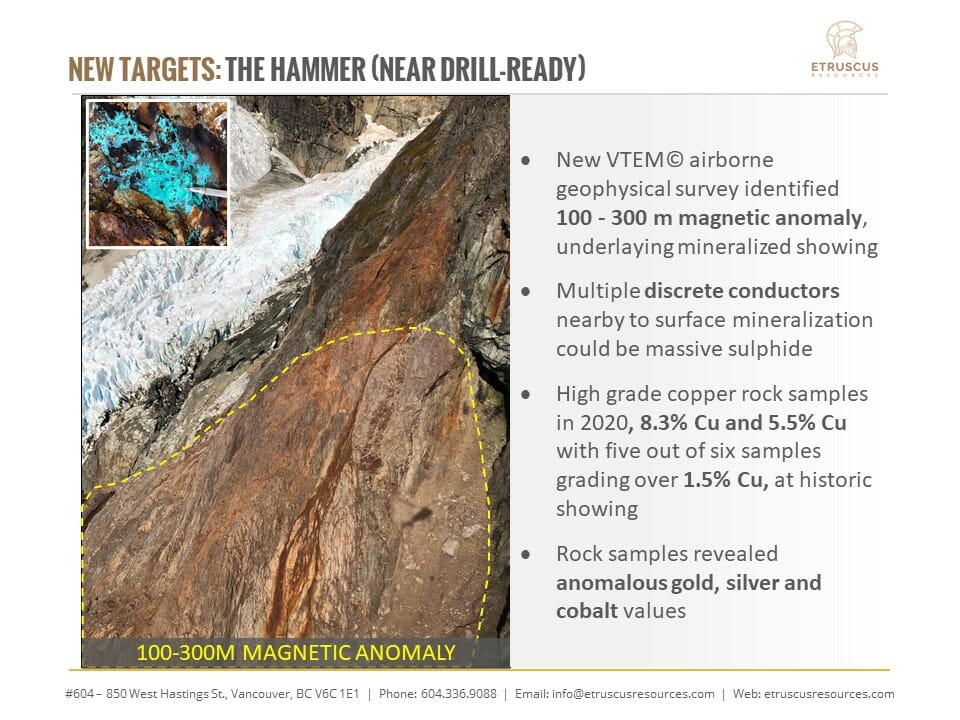 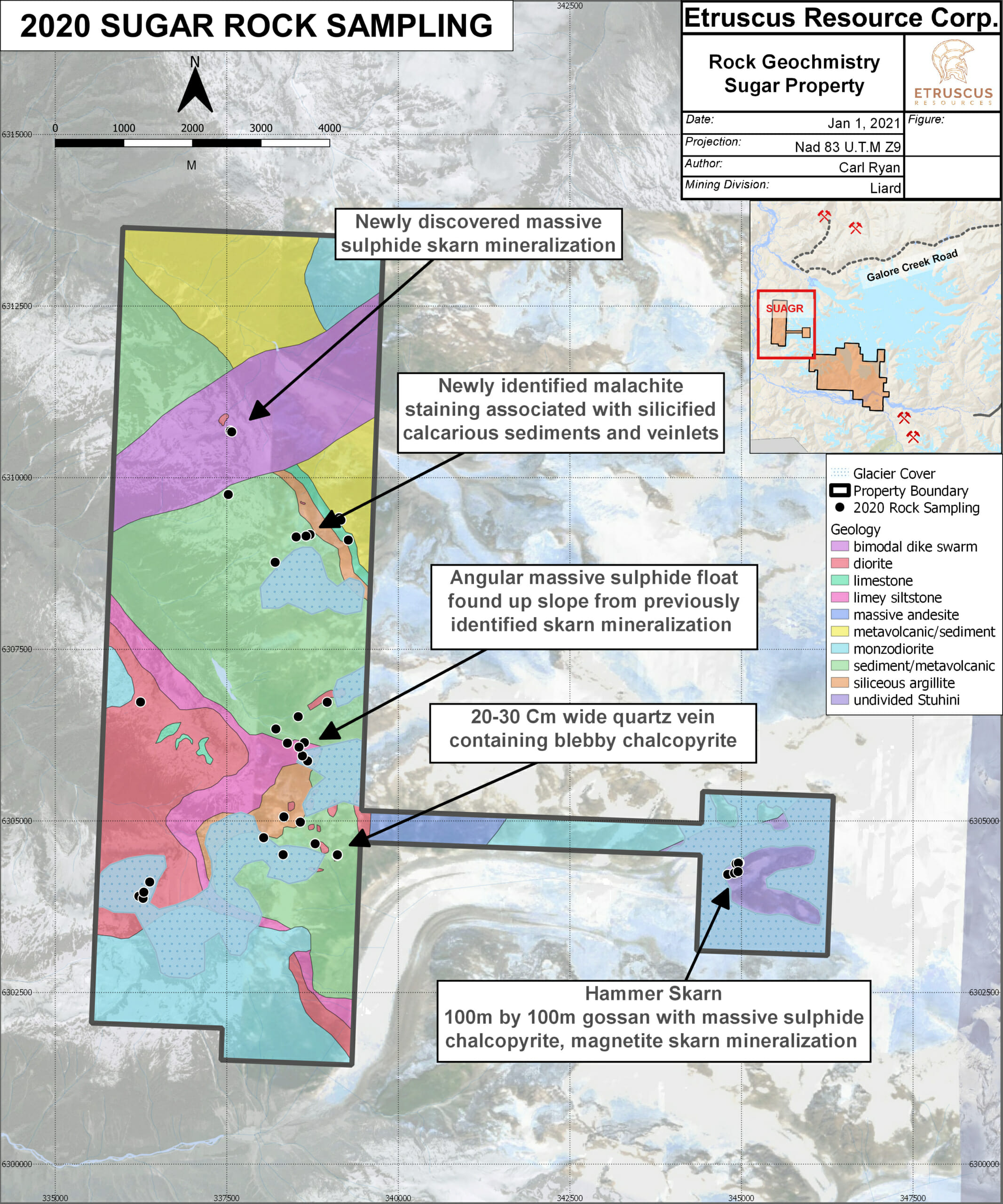 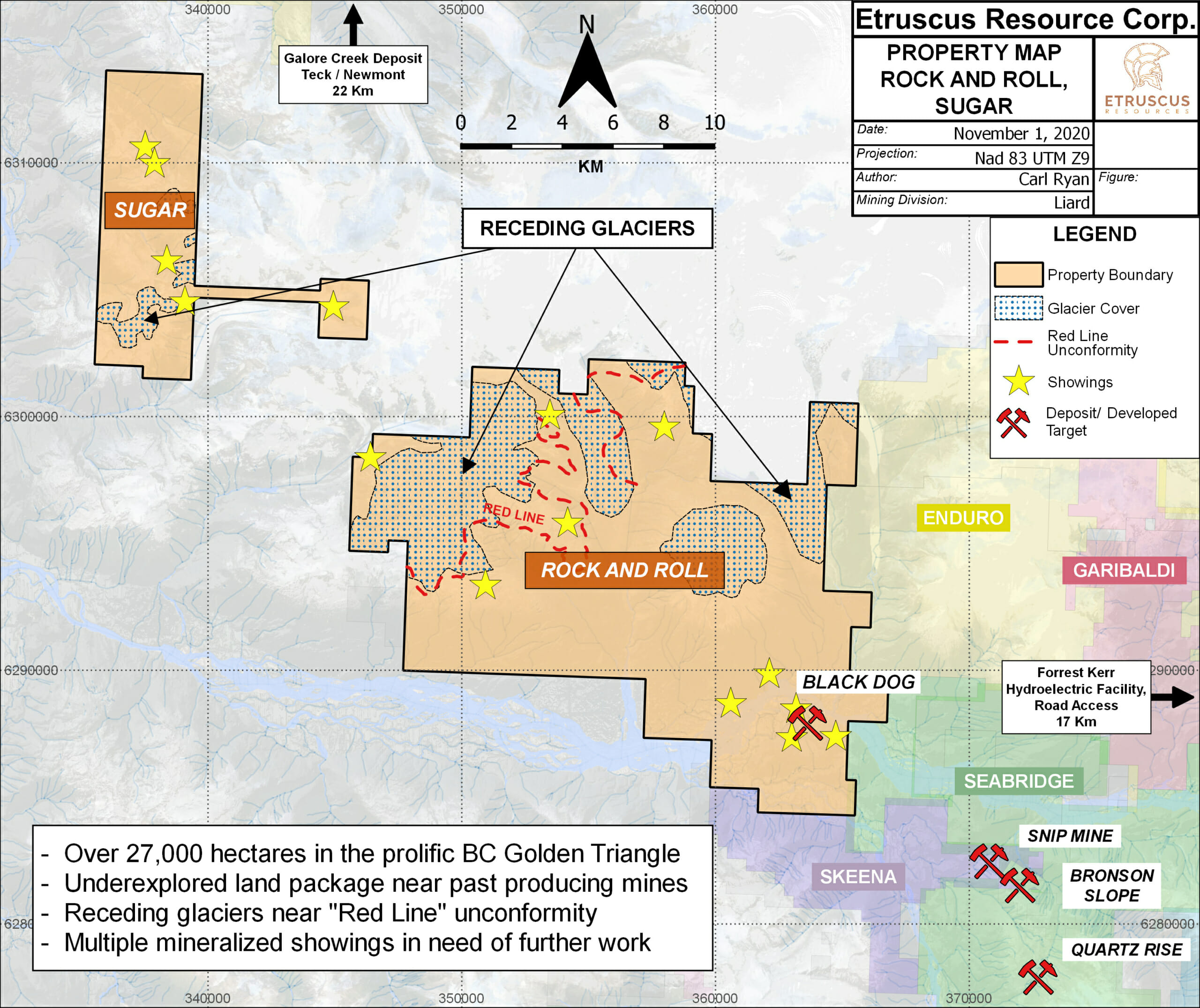 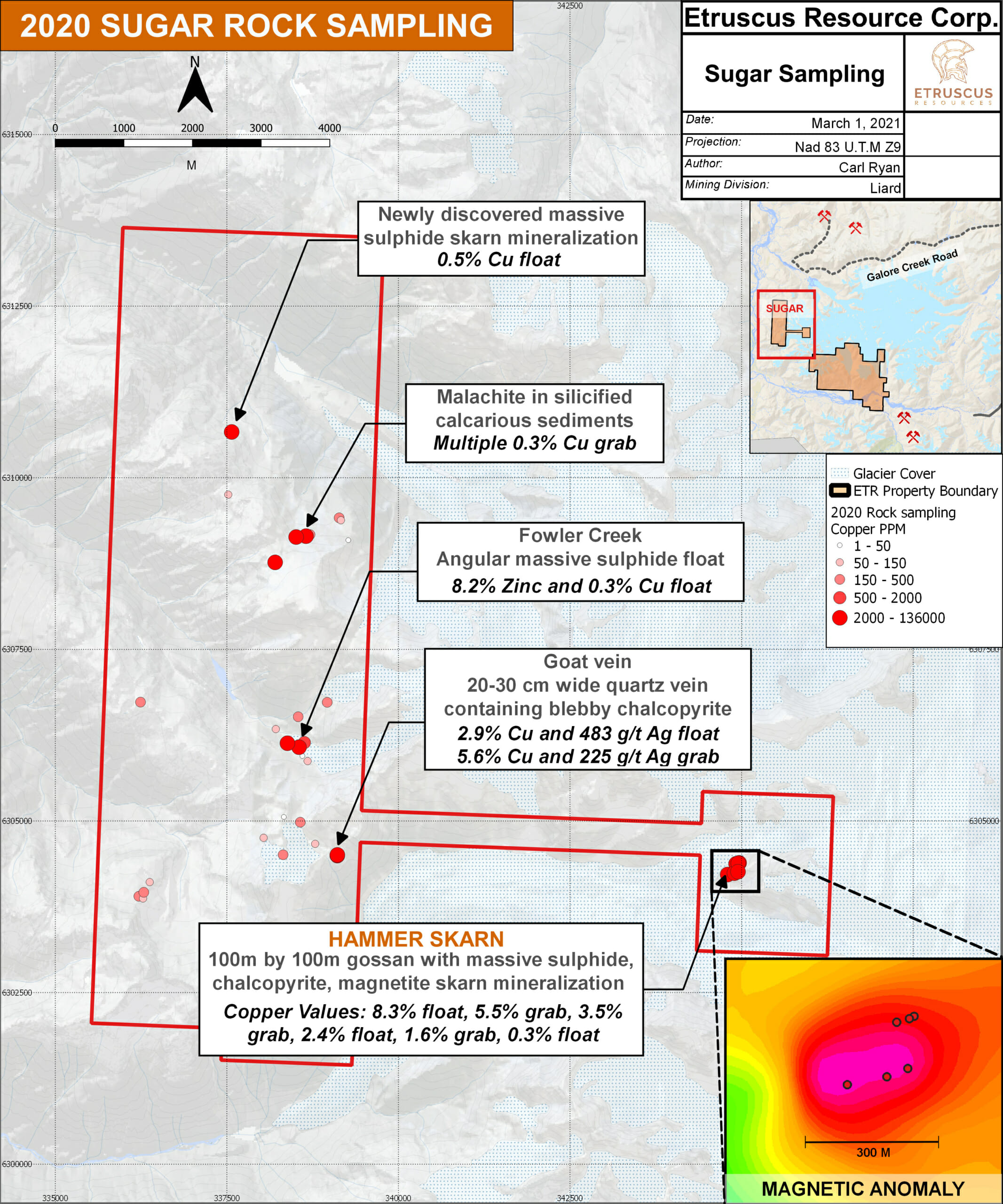 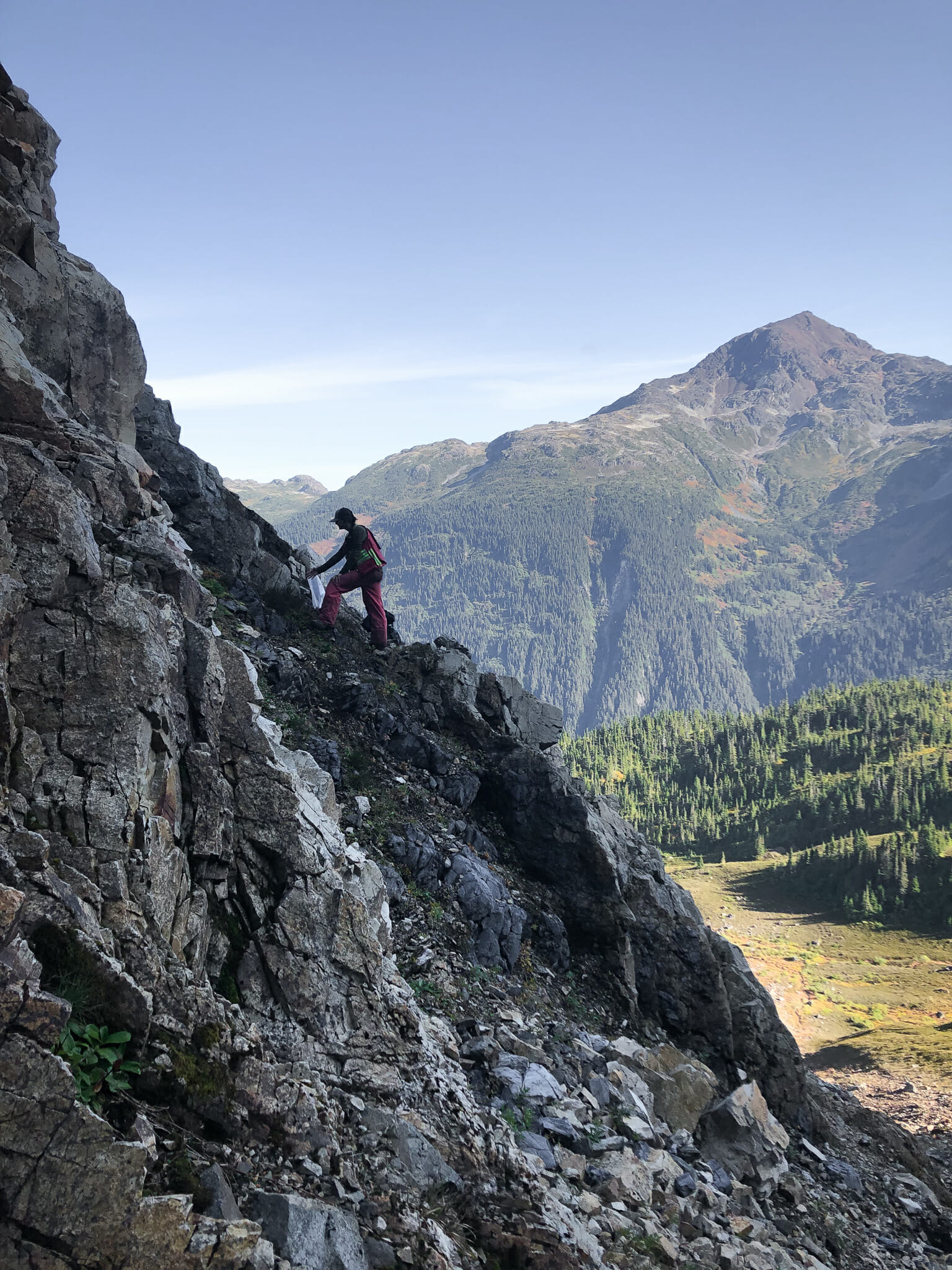 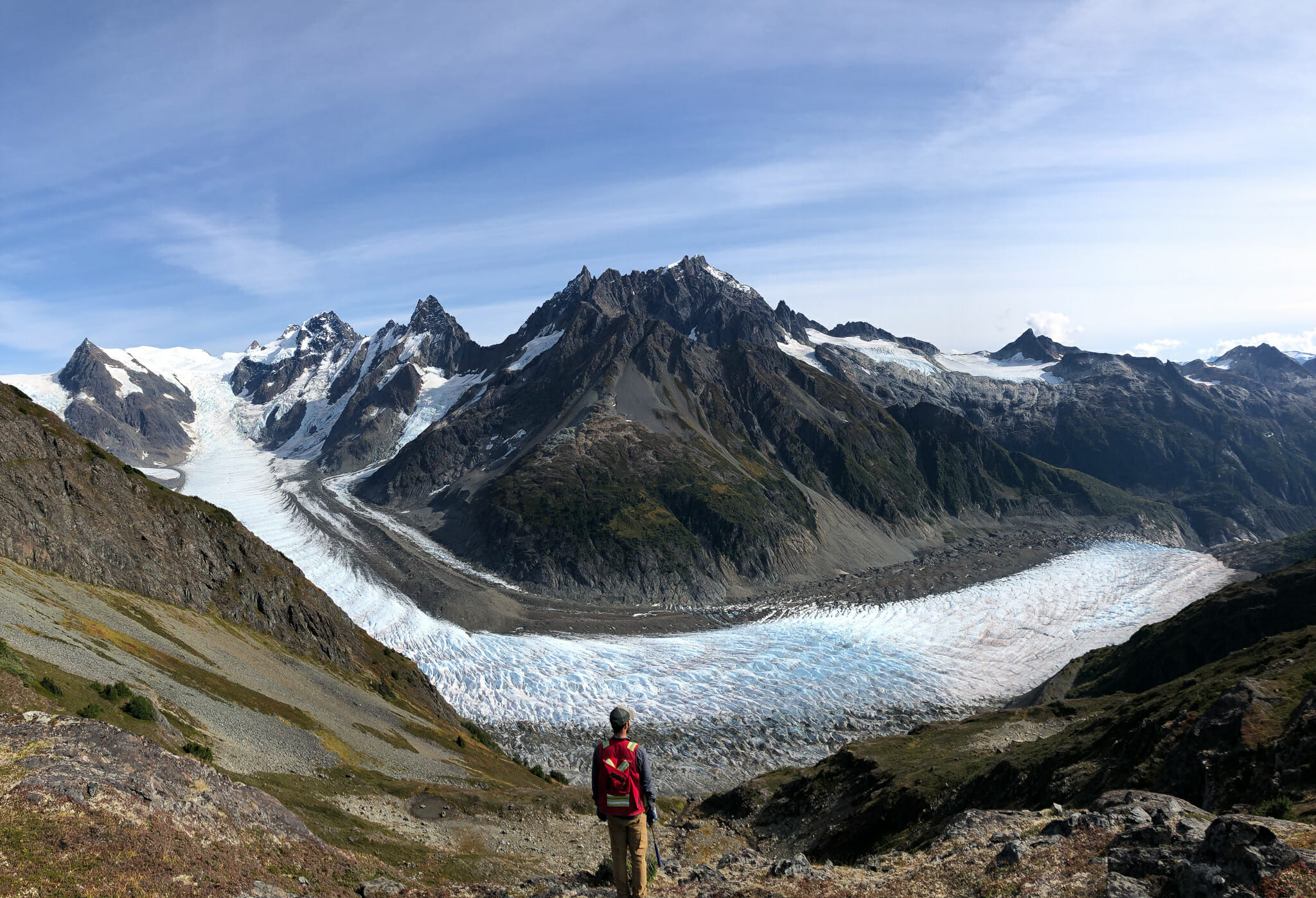 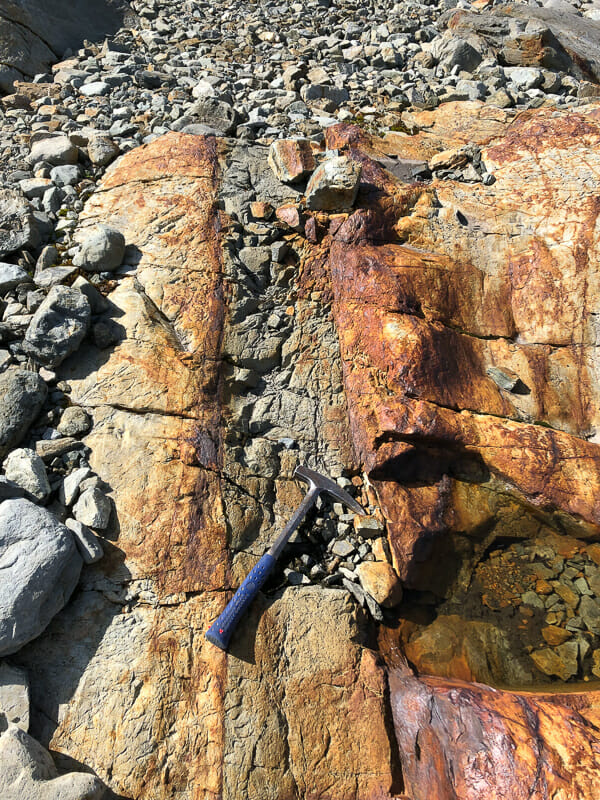 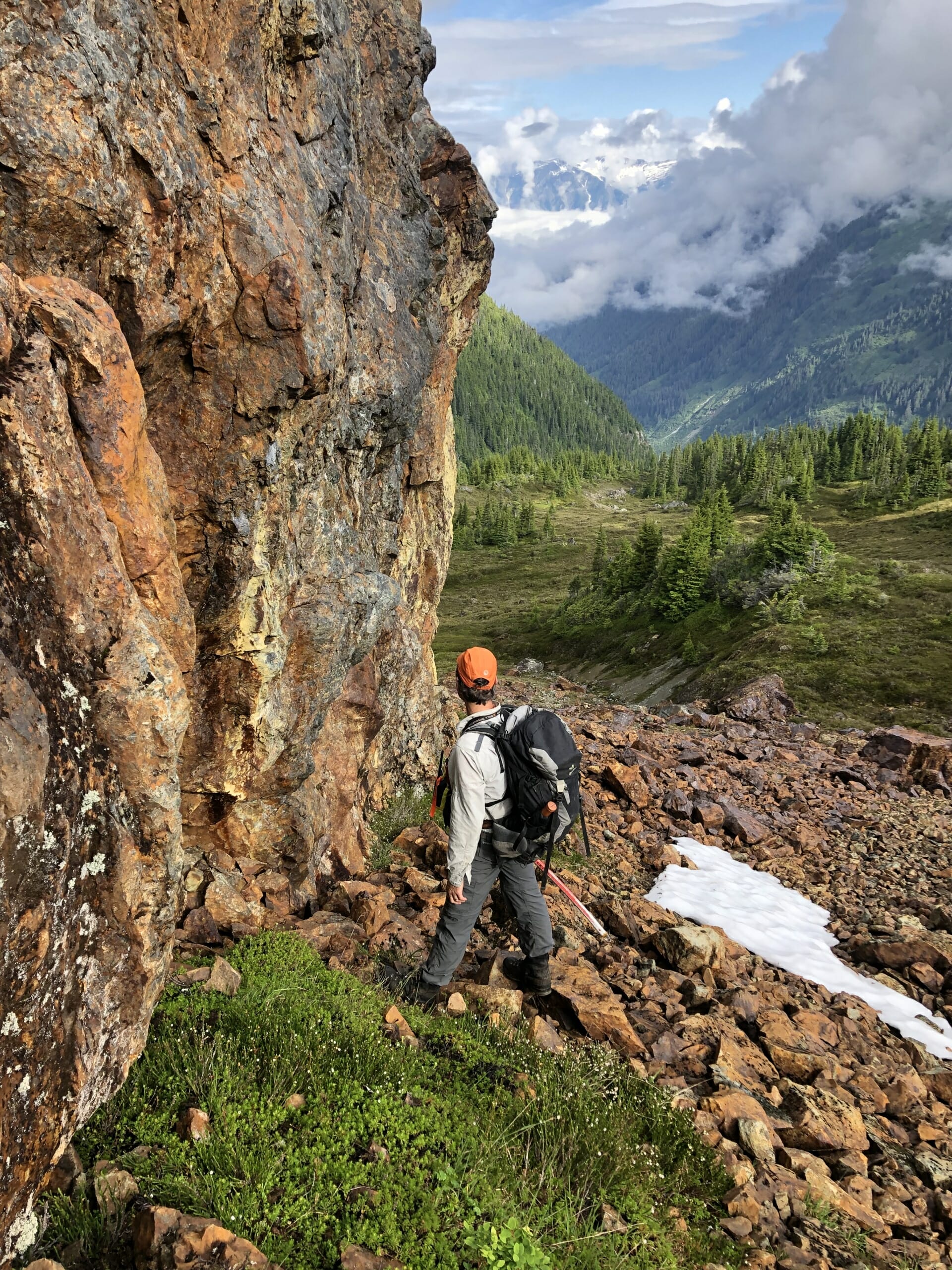 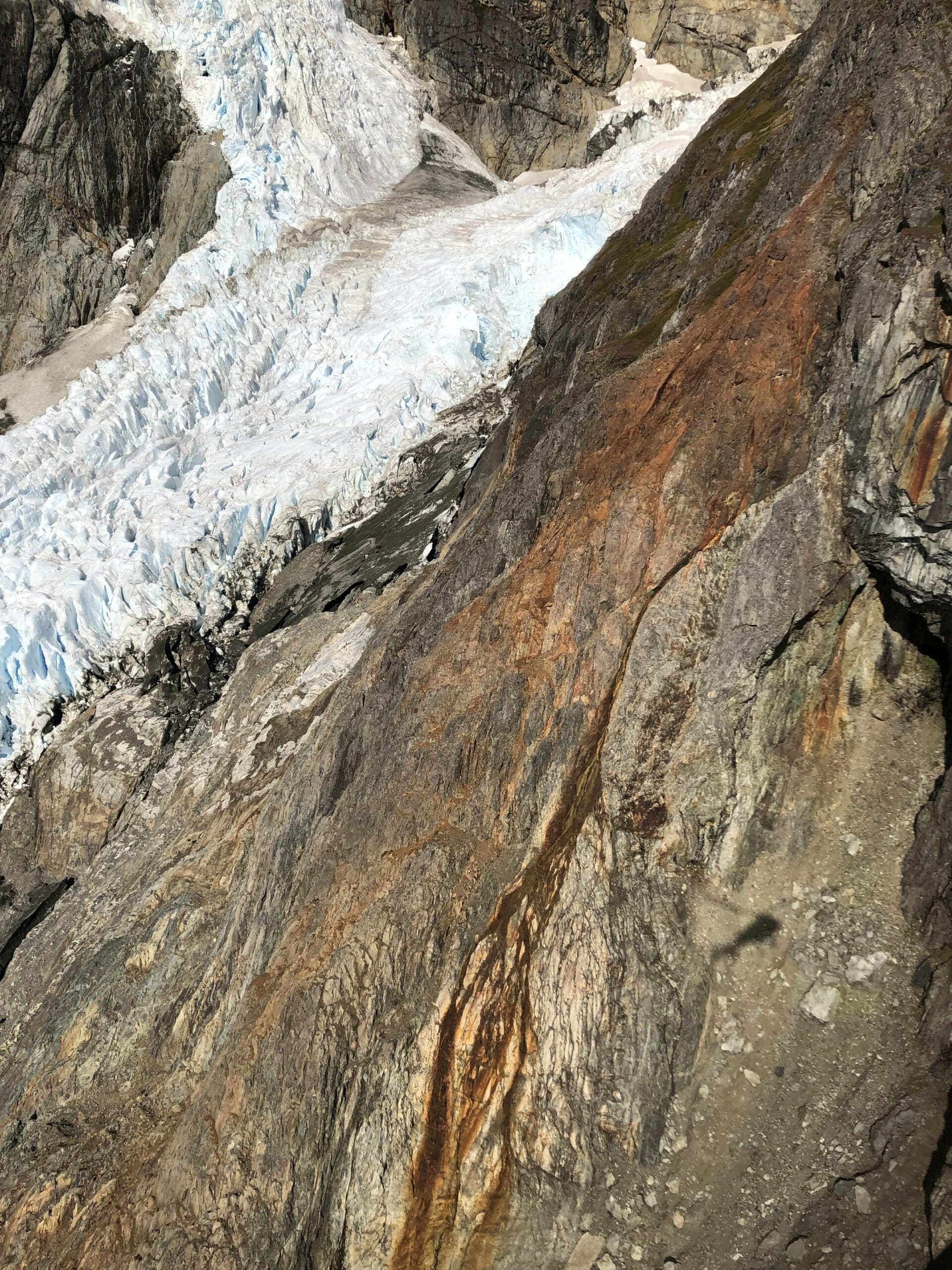 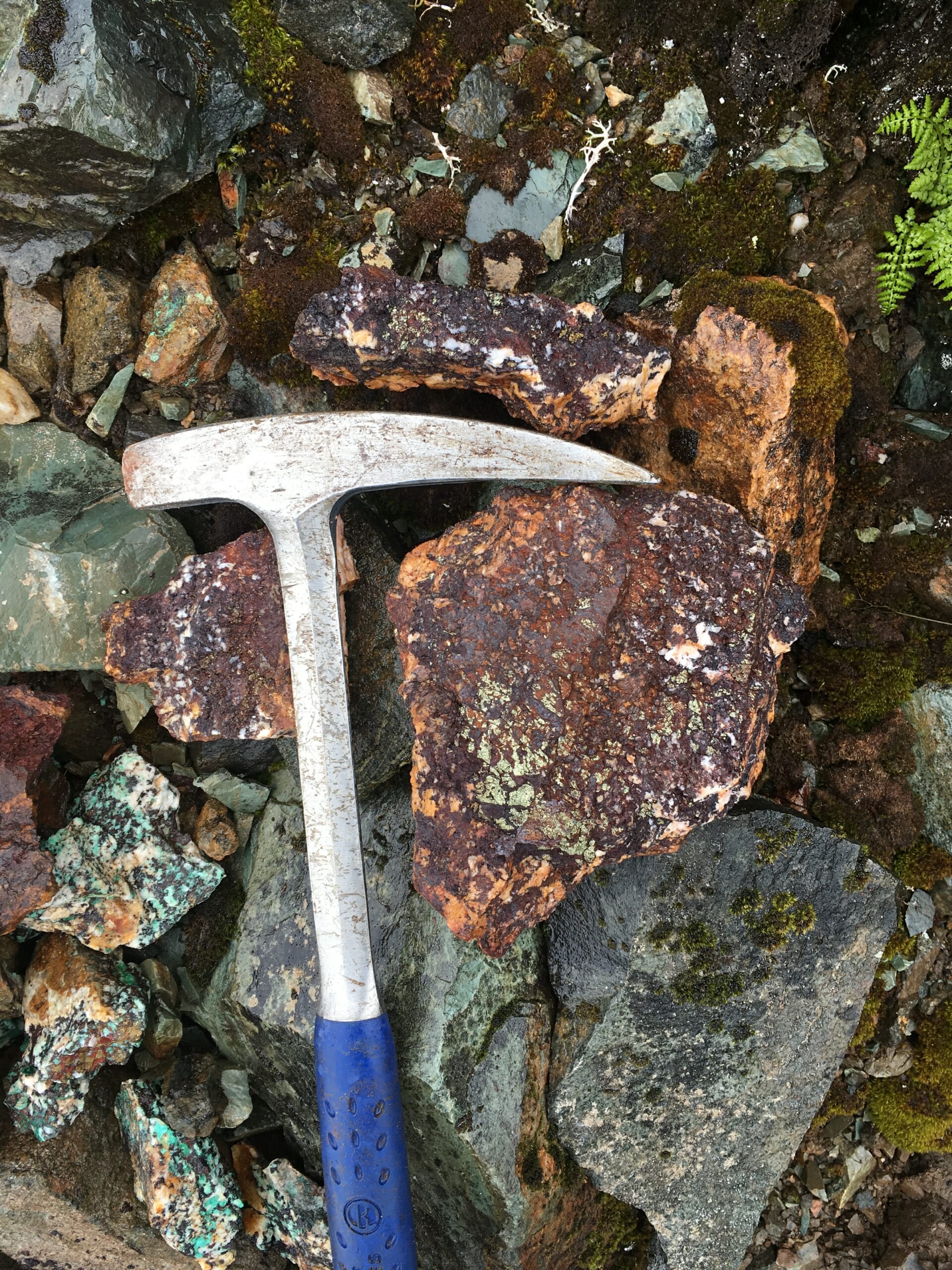 Based on the large scale geochemical anomalies found across the property, Continued field work programs will be initiated in 2021. Detailed mapping will take place at all the main historic showings. Prospecting will take place along the toe of the glaciers to assess new unexplored ground. Geophysical tools will be utilized to vector into future drill targets most notably at the Hammer showing as this emerges as a well defined target. Further exploration will continue as the Sugar becomes an attractive property for discovery as infrastructure moves closer and closer.

The ongoing goal for the Sugar property is to advance all the current mineralized showings into a more cohesive geological model that could lead to a large copper porphyry target similar to Seabridge’s KSM deposit or Teck/Newmont’s Galore Creek Deposit.